Diego Collector; Norm Hershfield shares his own personal experience with how he collected Diego artworks;

“I never really met Diego. I fell in love with his (Diego) paintings, when I saw them at Dino’s Restaurent (a favorite restaurant of Diego Voci’s Art Historian, Coop Cooprider) and the Ramsteiner Hof. I also frequented Herr Dahm’s Gallery in Wiesbaden for many years. I bought mine (Diego paintings) from the agent (Christine Khan) who sold them at the Ramstein Officer’s Club and at some of the bazaars.”

Read more about Diego and his connection with displays at Restaurants in Germany. https://diegovociproject.wordpress.com/2015/06/12/dining-with-diego-in-germany/

“When you need money, I go paint some”, common words from Diego to Helga. Helga Voci, widow of Diego Voci, shares some moments of Diego.

“Diego did not get so much excited when he sold a painting, he knew he needed the money to pay the bills, but money did not really interest him, he wanted a good life, nice Restaurants, Holidays, good Hotels, pay his bills, the house, etc. but he never was interested to save money, he did not care, as long as I [Helga] had a comfortable life and Alessandra [daughter] had everything she needed, everything was fine.”

The truth is if Diego could look down and see today;

The only things left for his widow and daughter at his death in 1985 were “some paintings and debts”. Helga at 78 with a daughter with Crohn’s Disease, is still working as a framer of other peoples’ art to meet expenses…
…THEREFORE, Helga is now offering the one piece dear to her heart she said she would never sell; The self portrait of Diego.

In this rare self portrait of Diego (Der Künstler und Sein Model, oil on canvas 32″ x 24″), surrounded by his love for art and his inspirations is offered on the Diego Voci Project website for 6000 Euros. Here is the link and explore the inspirations and intimacies of Diego Voci. https://www.diegovociproject.com/_p/prd4/4674134593/product/der-kunstler-und-sein-model

The Diego Voci Project is gathering “everyday moments” of Diego.

We posted a series of questions on Artifact Collectors to help us learn more about Diego.  http://www.artifactcollectors.com/diego-voci-antonio-diego-voci-3984818/Page17.html#115141

Helga Voci in Germany, responded.  She is the widow of internationally collected artist Diego Voci (1920-85).  Helga shares with us her behind the scenes life with Diego.

What would Diego say when he was smoking a cigarette? (2 packs a day, unfiltered)
“Diego said never anything when he smoked, he enjoyed his cigarettes, and he only got mad when me or somebody else would criticize for smoking so much. He smoked all over, in the house, in the car, at a friends’ house.”

Would Diego say anything after a first sip of wine? “Wine was fine for him, but he would never drink more than 1 or 2 glasses, after dinner only espresso and water.”

What were the first words out of Diego’s mouth when a potential collector came thru the door?  “Diego was always friendly and very pleased when somebody would come through the door, a customer or just friend, he always liked to have guests in the house, we always said-we have an open house.”

What were the first words out of Diego’s mouth when Diego put down his paint brush and knew a painting was done?  “When a painting was done, he would put it away and it did not interest him anymore, he was only interested in a white canvas, so he could start again.” 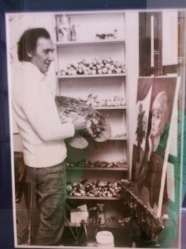 What were the first words out of Diego’s mouth when he sold a painting?  “Diego did not get so much excited when he sold a painting, he knew he needed the money to pay the bills, but money did not really interest him, he wanted a good life, nice Restaurants, Holidays, good Hotels, pay his bills, the house, etc.  But he never was interested to shevel money, he did not care, as long as I had a comfortable life and Alessandra had everything she needed, everything was fine.”

What would Diego say over and over and over again to Alessandra?  “He always would say to Alessandra “Pallina mia” (little ball), he loved her very much, he would go to Italy once a year and buy beautiful dresses, coats and shoes in expensive boutiques for her, this was his biggest pleasure, he would buy everything what she wanted.”

Helga, what slipped into Diego’s voice to keep you calm, “quote” in his words? “To me he would say: Tutto bene (everything all right), non aver paura (don`t worry), and stai calma (be quiet, there are no problems).”

Diego Collectors, share your memories with us at diegovociproject@gmail.com.