At the Diego Voci Project, our research unveiling Diego Voci footsteps around the world led him unconfined in one space or in one town. Diego traveled around to take in life, click to experience more;
https://www.diegovociproject.com/helga-and-diego

Images above are faded polaroids of the original paintings. Provided to us by Helga Voci, owner of the Diego Voci Estate 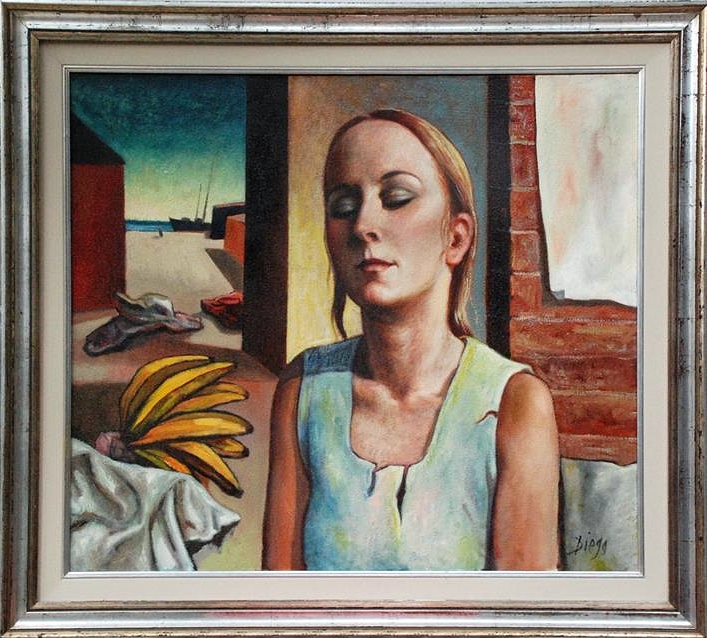 After connecting with Tom in March of 2015, the DVP found that not only did Tom share an exciting and clandestine adventure with “Diego” himself, this exquisite oil painting by Diego has a story of it’s own. To read about their “energizing” #adventure click on link at bottom of the WP post.

Circa 1973 Helga #Voci began keeping index cards of Diego oil #paintings, cards not found again until this year. Of recent DVP discovered 2 cards for the same painting. Coop has been the Diego Voci #Historian since #1973 and he and wife Patti continue to collect Diego #artwork and proudly display them with no intent to let go of any Diego artwork!

In 1974 Coop purchased“La fille du port” in Diego’s studio. Diego later, on Christine Khan’s behalf, asked Coop & Patti for some of their Diego collection to keep Christine in business.  Since Coop let Patti choose a few, he had no idea which paintings were selected. Fortunately and unfortunately it ended up including the “La fille du port”.

Once we made the connection of 2 Index cards selling the same painting the mystery was solved. Sold to Coop in 1974, it was resold to Tom in 1980, who proudly refers to Diego as his “close friend Antonio”.  “La fille du port” is in good hands with Tom and Ena.

Coop says “Tom has great taste”and that had he known Patti selecting this one          he’d have stopped her!

Mädele am Hafen was sold to Maj. and Mrs. Angel Herrera in Heidelberg by P. Precher June 8th 1980.

To view “Each movement had its great masters, but there are very few who could create art unconfined by a single style like DIEGO.” by Chris Voci.