Helga Voci, widow of Diego Voci shares;
“In the beginning of the seventies we moved to #Bavaria, where my parents lived and where they intended to build a house and Diego was supposed to help them. So, we rented an apartment in the same #village. At the same time Diego did not like doing business with Joy Naffouj anymore; and Liliane Dussard, a #French lady who had been working for Naffouj in her #gallery for a while, wanted to change also.

So, Diego and Liliane decided to work together (around 1972 for several years). Liliane came to our house and she started to take contacts with #Nürnberg Ladies Clubs and Officers’ Clubs and had soon several dates for #exhibits. Now we needed frames, as everything was an #experiment. In the village, we found a #wood joiner and Diego made models of frames, so he started to do a collection of frames in different sizes, then we got these frames and Diego`s atelier became a frame workshop. Diego painted on #canvases and Liliane and me painted and #gold-plated the frames under Diego`s instruction. We were almost working day and night, as everything had to be ready for our first exhibit.

And then we started our first exhibit in the Officers’ Club Fürth near Nürnberg and it was a very big success.”

(This history is a little fuzzy with dates): Liliane Dussard (deceased now) represented Diego beginning in 1972 and times throughout his years until 1985.

Lilian Dussard moved to the United States in 1973 and opened a gallery with her name: Dussard Art Gallery in Strafford, Virginia. 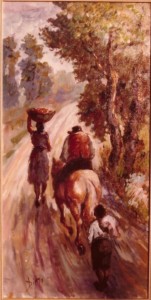 We know Liliane’s had this painting by Diego Voci in her own collection: “Retour du Travail” #451-260

The #New Generation of DiegoVoci™ aficionados continues to build as the #DiegoVoci™ Archive received an image of painting by Diego from a half a century ago. What is the connection to General #Patton?

James, who lives in the U.K., is a proud #New Generation owner of “Cheveaux Arabs” (Arabian #Horses), a Diego painted in 1969. James Cockerill reveals its history:

“It was won at the German American Friendship Ball, chaired by George Smith Patton IV, [a Major General in the United States Army and] the son of famous World War II general, George S. Patton. My mother was working in Major General Patton’s office in the very early 70’s.

At the ball it was the First Prize in a Raffle, which my mother won. It’s been owned by my family ever since. I remember it always hung in the lounge on the wall. We were living in Nuremberg (Nürnberg) which is where I was born.”

The back of the canvas reveals a mystery. Who blacked out the writing and why?  The top one appears to be the signature of “Jawdat” #Naffouj who had an exclusive contract with Diego at that time. It looks like the #painting went back to Diego for some reason – and either Diego or Jawdat was the obliterator. There are others like this. Do you own one?