No information about this image, nor time frame and nor the painting pictured in Diego’s #studio.

Any information or details about this painting including its current owner and location please email us at diegovociproject@gmail.com. We would like to add to the #DVP #Archive.

“It’s one of the most important Old Master discoveries in the past 15 years.” DIEGOVOCI inspired by and used as a model for much of his own “Christ” works of art. Click here to see: https://www.artifactcollectors.com/diego-voci-p…/Page2.html…

An “excerpt” from the DIEGO VOCI NOVEMBER 2018 NEWSLETTER that Stephen Max (one of the DVP’s volunteers) creates for all of Diego Voci’s collectors as a way to stay connected to the Legacy of Diego Voci.

At least the Amazonen existed in Diego’s dream which he transferred to this canvas “Die Amazonen”. The ancient parchment illustrated is only the second known tribute to the Amazon warrior woman by internationally collected artist Antonio Diego Voci (1920-1985). Help us find this one.

The other is the Picassoesque “Amazonni”, a masterpiece in the collection of Coop Cooprider Diego Voci Historian since (1973)*. Link https://www.artifactcollectors.com/diego-voci-painting-of-the-week-5154118/Page9.html#87210

*Sold to him on his 1973 trip to #Colorado by Marsha Largent Piper, daughter of Dr. Ogden Brown, who was Diego’s exclusive USA representative.

Since late 2009, the Diego Voci Project has been in a worldwide search for the best of Diego Voci oil paintings. We just found this “VOCI” masterpiece in Lithuania for $3,500 complete door to door. 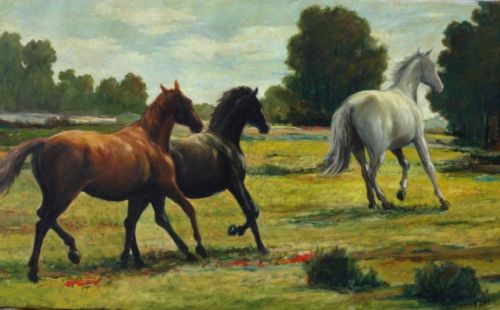 This is only the 4th “VOCI” discovered so far from the era of Diego’s connection to the Schlossgalerie (who served a wealthy horse owner clientele) in Zurich advertised as “Antonio Voci”, 1962-1965. It is the first that DVP could acquire for the day a generous benefactor is willing to finance a major Diego Museum Exhibition.

In his early career internationally collected artist Antonio Innocenzo Voci (1920-1985) signed his works some form of VOCI (VOH-chee).  He was known his nickname by “Diego”. About 1966 he began using the “Diego” signature through 1985.

Here are the 3 other examples of “VOCI” paintings: