Could that be any relation to Dr. Odgen Brown who represented Diego in USA starting 1973 and gave his first big exhibition at the Broadmoor Resort in Colorado?  https://en.wikipedia.org/wiki/Antonio_Diego_Voci#Exhibitions_in_the_US

WHERE IS THIS PAINTING NOW AND WHO OWNS IT? Contact us at DVP diegovociproject@gmail.com.

Marsha Largent Piper (daughter of Dr. Ogden Brown, collector of Diego Voci and once USA agent for Diego Voci) just sent the Diego Voci Project an image of herself with Diego during the 1973 Diego Voci Exhibition at the Broadmoor in Boulder, Colorado.  Marsha recalls laughing often with Diego.

In 1973, when Diego was staying with collector Dr. Ogden Brown in Colorado, Diego was at his creative best. He experimented with Glass paint right in the Brown’s kitchen.  Diego cooked and painted with glass paint. Yes Diego had to “cook” the glass paint.

From Marsha’s collection here is a wild example by Diego:

In 1973, The Brown Family curated the first USA exhibition for DIEGO VOCI at Boulder Colorado’s exclusive Broadmoor Resort. The Invitation: 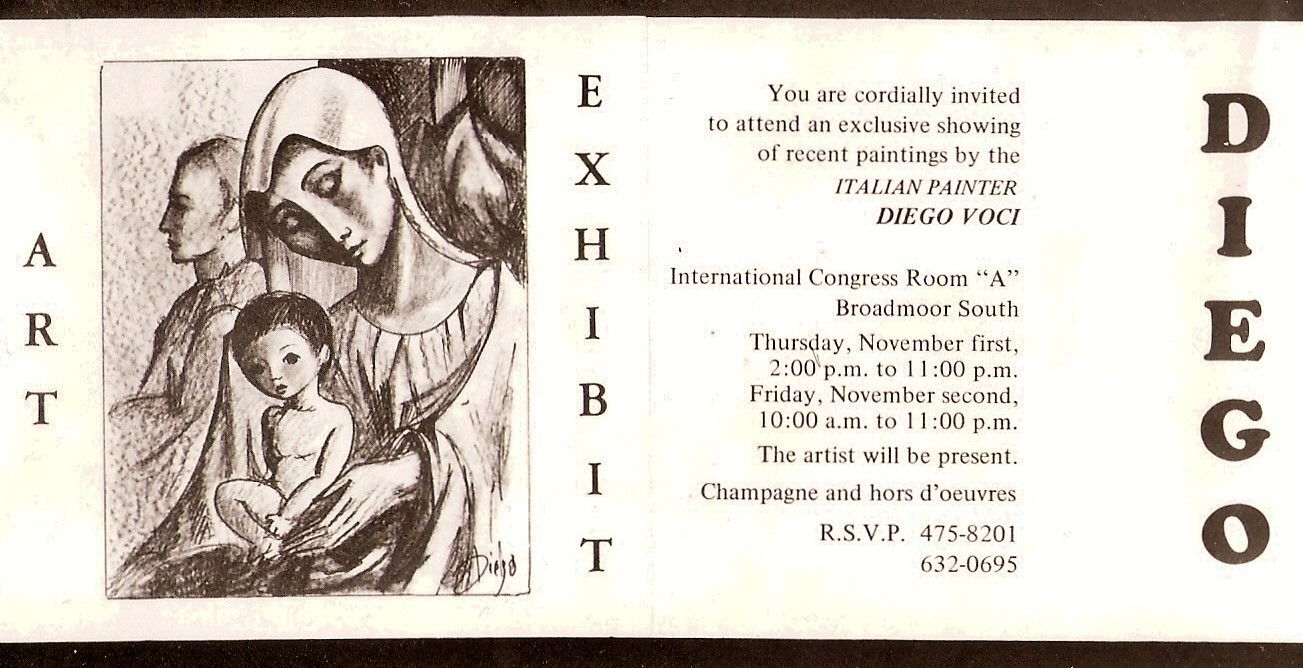 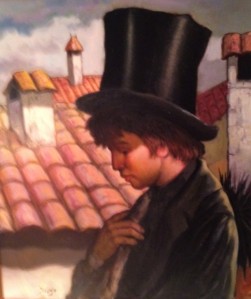 The Brown Family retained this painting “Il Spazzocamino” for their family collection of Diegos.

The significance of a “chimney sweep” brings good luck in Germany.  When the chimney was stopped up, the man in black had to be called in to clear the flue so you could finally cook your food again. A clean sweep also reduced the risk of setting the house on fire. So to this day we consider it good luck to see a chimney sweep.” 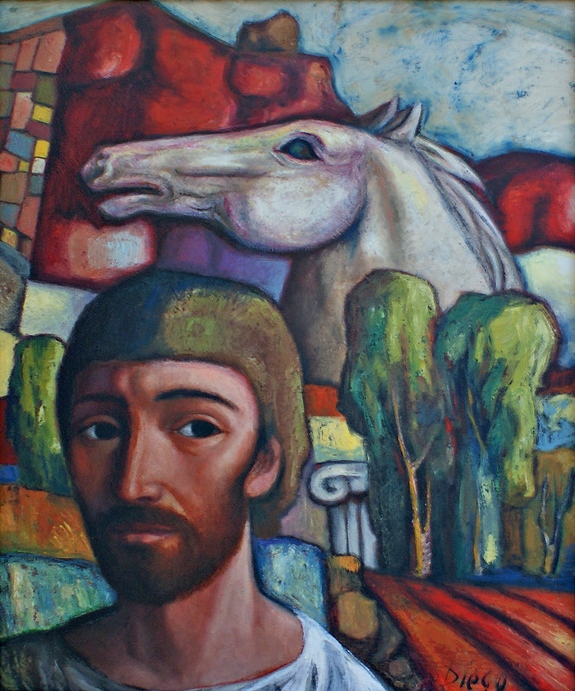 The Provenance is the source of credibility to the life of a painting.  The White Horse by Diego Voci began with Diego himself and then was placed into the hands of Naffouj Gallery in Germany, Diego’s representation at the time during the 1960’s (often identified by the wood wedges which Diego used during the Naffouj time period).  The White Horse traveled back to Diego’s hands in the 1970’s (as it was placed in a frame that Diego’s wife, Helga Voci, made for the piece).  The painting in 1973 was in an exhibition in Colorado Springs, Colorado at the famous Broadmoor Resort sponsored and hosted by Dr. Ogden Brown Family.  After the exhibition, The White Horse traveled back to Diego’s hands in Germany then flew to Edmonton, Canada in 1981.  Stephen Max acquired the painting as Diego’s representor for Canadian collectors in his Gold Crest gallery.  The White Horse was purchased by art collectors Giselle and George Dean of Edmonton, AB, Canada.. where it has been ever since..

To learn more search “Diego Voci” on Google and YouTube.