Antonio Diego Voci (VOH-chee) https://youtu.be/_WUYmz0Jkc0, the youngest of 3 brothers was born Antonio Innocenzo Voci on 10 August 1920 in the mountainous region near Catanzaro, Italy, in the small village of Gasperina, Born to be an artist. 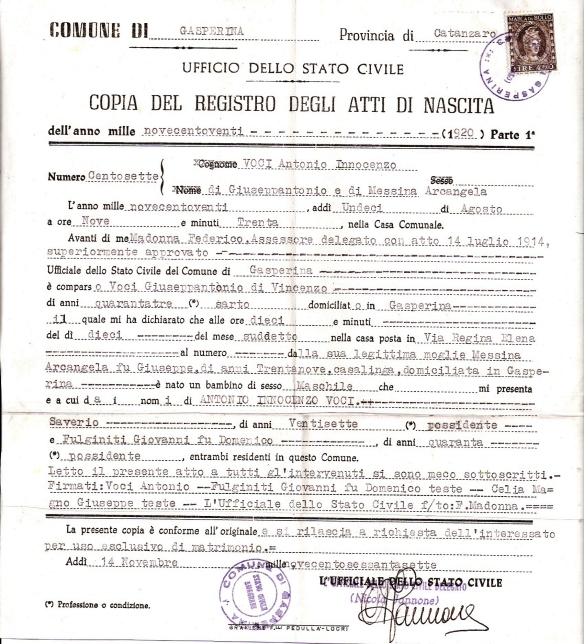 “Diego” was the nickname in the artist’s adult life. He shunned his middle name “Innocenzo”. His family called him “Toto” as a child he signed his works VOCI through 1965. Thereafter “Diego”.

Diego lived up to the title of his 3-page biography “This Artist Is A Lion” that appeared in the May 1974 TV Guide. “His course mane of black hair jutting out drastically behind him, DIEGO is the image of his zodiac symbol – the lion.” https://www.artifactcollectors.com/diego-history-4330818.html#43393

Diego’s voices came thru his art and over the years became the “Artist of a Thousand Faces” and “Master of the Surreal”. To view the book, “Beauty of Diego” http://www.blurb.com/books/5419805-the-beauty-of-diego

Since late 2009, the Diego Voci Project has been in a worldwide search for the best of Diego Voci oil paintings. We just found this “VOCI” masterpiece in Lithuania for $3,500 complete door to door.

This is only the 4th “VOCI” discovered so far from the era of Diego’s connection to the Schlossgalerie (who served a wealthy horse owner clientele) in Zurich advertised as “Antonio Voci”, 1962-1965. It is the first that DVP could acquire for the day a generous benefactor is willing to finance a major Diego Museum Exhibition.

In his early career internationally collected artist Antonio Innocenzo Voci (1920-1985) signed his works some form of VOCI (VOH-chee).  He was known his nickname by “Diego”. About 1966 he began using the “Diego” signature through 1985.

Here are the 3 other examples of “VOCI” paintings:

“#Diego” as he wanted the world to know him, rejected his birth middle name “Innocenzo”.  Being the youngest of three boys by fifteen years, that sweet little newborn was the picture of innocence (Italian: innocenza). Diego wanted to be seen as anything but innocent.  The family pet childhood name “Toto” was enough to bear. “Diego told me he never liked his middle name,” said Helga Drössler Voci, wife. “Innocenzo” is conspicuous by its official document absence in Diego’s life. Innocenzo was discovered only on his birth certificate (see below). After that it is “Antonio Voci” until 1976 when “Diego” is slipped into a government document.” – Antonio Diego Voci Wikipedia

“In 1976, the metamorphosis of Diego for his middle name was completed by Diego on at least one official document when he registered residence in Taunusstein (by Wiesbaden) at the time he and Helga purchased their first and last home and studio. The name is “Antonio Diego Voci”, finally official recognition of Diego on a government document” (see below)

Can anyone out there read #Italian?  Help us!  As DiegoVoci™ #historians we are seeking the truth.

Did, or did not, the deceased father of artist DiegoVoci™, Giuseppe Antonio Voci  have a brother?

In the little town of Gasperina, Province of #Catanzaro, #Italy, the birthplace of DiegoVoci™ resides an elderly gentleman in his nineties who claims he was the best friend of Diego’s father Giuseppe Antonio Voci and he insists did NOT have a brother!

But, what appears to be the images of the official birth records going back 192 years to 1823 from the town’s Registrar of Vital Statistics (“Ufficio dello Stato Civile”) in #Gasperina seem to indicate there was a brother named Saverio.  Two sons appear to be born to the same mother and father Vincenzo Voci (1847) and Elisabetta (neé Procopia).  One of the sons born 1877 was Giuseppe Antonio (Diego’s dad). The other son, Saverio Voci, was born 3 years earlier to the same mother and father.  Therefore the official papers appear that Diego’s father Giuseppe Antonio did have an older brother named Saverio.

Help us with the Italian on the Birth Certificates.  Is the #Gasperina Registrar’s office in error?  Or is the elderly gentleman mistaken?  They can’t both be correct.  It would be highly unlikely there were two sets of Vincenzo and Elizabetta in the same time period?

Here is the evidence from the “Ufficio dello Stato Civile” Comune di Gasperina :

1a. Here is the 1877 signature of the Gasperina official on the birth certificate of Giuseppe Antonio.

1b.  Here is the 1874 signature of the same official on the birth certificate for Saverio, with the same parents for both.

The questions being asked by members of the Diego side of the Voci family are:  Why haven’t we ever heard there was such a brother? And, if he did exist, what happened to him? Is the Saverio birth certificate suspect?

What do you think?