What the gallery says: “‘Renaissance: Noir’ investigates Blackness on the continuum of the historiographies of African American artists’ narratives that assert, individually and collectively, their state-of-mind and state-of-being Black. An existence of ‘double consciousness,’ as coined by W.E.B. DuBois, where one is constantly combating the ‘isms’—racism, colorism, sexism, capitalism, colonialism, escapism, and criticism—through the act of artistic activism. https://news.artnet.com/exhibitions/renaissance-noir-at-uta-1885608

I was tasked to find Bob Sholar 40 years after my father, Coop, Diego Voci Historian, had visited him in Lorton, VA. I had my father’s hand scribbled 1974 notes on yellow pad indicating Sholar owned 30 Diego paintings! 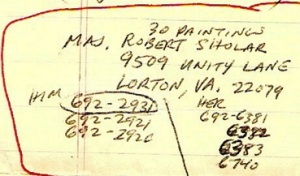 I found him in August 2014 in central #Florida. Bob and Gretchen Sholar, 4 decades later still have their halls filled with Diegos, their master bedroom is covered with Diegos, as is their bathroom. Antonio DIEGO Voci was and is a part of their life.

Bob reminisced with me about his memorable “Bull Story” when in 1973 Diego was a guest in his Lorton,VA home:

“My office was on the downstairs level. While visiting and sitting in the office, Diego said, “Bob, I want to draw.” Diego sat on the floor, pulled out his paper, and began to sketch. Diego grabbed whatever tools were available while I watched in amazement as Diego created one after the other. Each one took maybe 15-20 minutes a piece; so within two hours there were 6 or 7 artworks. Diego asked me if I wanted him to draw anything in particular, to which I told Diego “I had this farm in Kentucky where I raised Angus Cattle. I want you to draw me a bull.”

While there, Diego offered to appraise Bob’s art, not just his DIEGO’s. Bob will be sending us here at the Diego Voci Project – that document when he locates it. Bob also has a photo of himself with  Diego – and Bob is determined to find it  for us as well.

Diego took off from VA to the West Coast – Bob recalls Diego had a show in Broadmoor #Colorado lined up with a collector he knew from Germany: Dr. Ogden Brown, curated by Marsha Largent (http://www.artifactcollectors.com/diego-history-4330818/Page3.html#90 )

When Diego traveled back to the East Coast, he stopped again to visit with Bob Sholar. When he arrived, one of the first things Bob remembers Diego saying, was

“America is a big country…so much open space …not so many people.”