Paintings by Diego Voci; oil on canvas. These images of the originals sent by Helga Voci, widow of Diego Voci (1920-1985) are old faded polaroid photos.

View more Beauty in this book published by Stephen Max in Canada https://www.blurb.com/books/5419805-the-beauty-of-diego 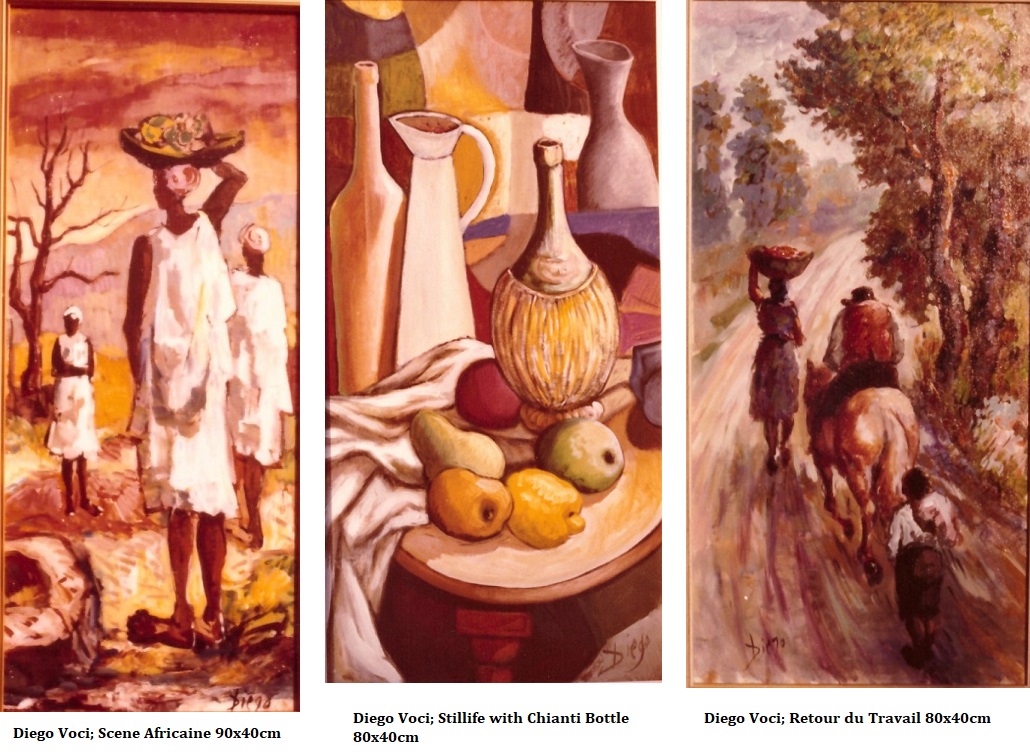 These faded Polaroid images are from Helga Voci, widow of internationally collected artist Antonio Diego Voci (1920-1985). The owners left to right, Major Green, Mr. and Mrs. Kellett and Lilliane Dussard. Where are these paintings now and their owners?

Since 2009, when the Diego Voci Project began with a find on the internet at ARTIFACTCOLLECTORS.com thanks to Mary Trimmins and a handful of Diego aficionados, the DVP has archived more than 1,000 artworks by Antonio DIEGO Voci (1920-1985) (VOH-chee). The DVP, our all volunteer group, purpose is to increase the awareness and the value of the great body of artwork created by DIEGO! We locate, collect and catalog Diego’s works as the only officially authorized DIEGO VOCI ARCHIVE by Helga Voci, Diego’s widow and sole owner of the DIEGO VOCI ESTATE.

Shown above is one of the many faded #photographs taken with the old fashioned camera that used film! The DVP has been featuring many of them, thanks to Helga who located and sent us a box of Index Cards she started keeping in the mid 1970’s. Coop Cooprider, Diego Voci Historian since 1973, had suggested ‘somehow tracking to whom the DIEGOs were sold‘. Since 2009, the DVP has been searching the world for more “LOST DIEGO ARTWORKS”. Some of Helga’s cards have images, but the majority do not.

Helga used both polaroids and film to catalog DIEGO’s works.  Shown below is the same DIEGO “Gasthaus” scene once it had been framed. Note how the FLASH however obliterates the female figure to the right. When taking images of your Diego art, note that the DVP is best suited to archive DIEGO’s artworks with reproducible (min. 300 dpi) straight-on squared images taken without a flash. Sometimes daylight is great too if not too bright! Front and back of artworks are preferred. Include any provenance you have!

#DIEGO VOCI’s large “Gasthaus” scene is shown here framed. What is the abstract image of   in the lower right back of the easel/painting? IS it a #Picasso horse?

If you recognize any of the DIEGO #artworks in our posts on SOCIAL MEDIA, email us: