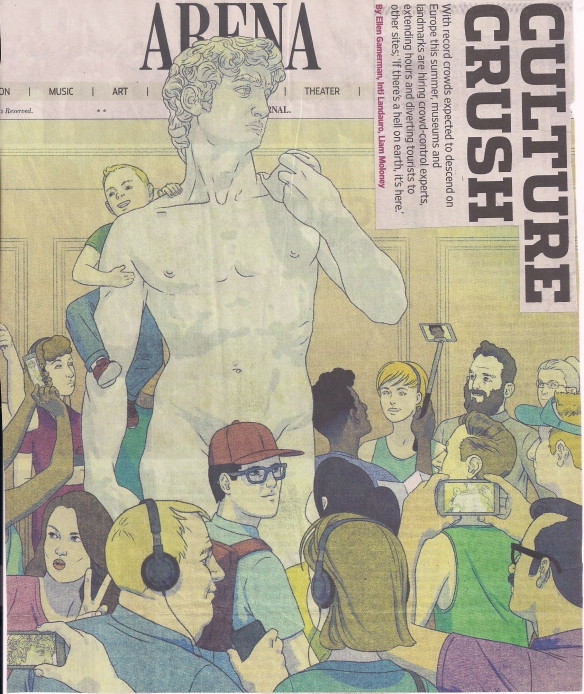 Proof is here. The magnetism of DIEGO VOCI art can be transferred to a “New Generation.”

Diego Voci died in 1985 of lung cancer. His great body of artwork has endured 30-50 years, largely unknown except to many of his original addicted collectors who bought many. They displayed them, enjoyed them and hoarded them for decades. Now these devoted collectors are dead, dying and or downsizing and Diego’s works are popping up everywhere at bargain prices. Keep your eyes open! diegovociproject@gmail.com

Enter Brad Fairchild, Graphic Designer and Photographer, 45 years old. His parents, Cheryl and Dan met Diego personally. On a tight budget with two little kids, they bought 3 DIEGO Lithographs in the 1970’s while in Germany. They found their first original Diego Voci oil painting in the US on e-bay:   https://diegovociproject.wordpress.com/2015/07/08/potential-diegovoci-model-kicking-herself/

Their son Brad has a sharp eye. Here is the Diego Voci masterwork, “Madonna” (31″x 16″) he discovered at an Estate Sale under $1,000. Genuine #gold leaf is inlayed, similar to the techniques used by Gustav #Klimt with the famous #WomaninGold. 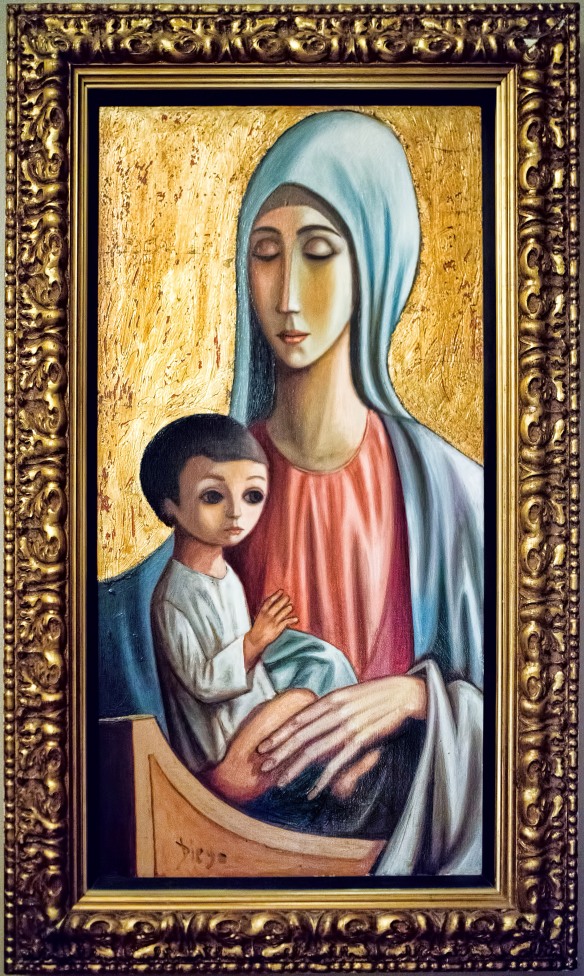 The Diego Videos can be seen on Youtube: https://www.google.com/webhp?sourceid=chrome-instant&ion=1&espv=2&ie=UTF-8#q=Diego+Voci&tbm=vid

Who controls the 11 artworks by Diego Voci (1920-1985) that took us 3 years to learn they belonged to Ciccio Barchetti, owner of Ciccio’s Ristorante in Pirmasens, #Germany, who passed away in September of 2013.   And, where are they now?

I am Kami #Cooprider, DIEGO VOCI PROJECT Research Assistant, who was raised in Germany by Patti and Coop Cooprider and I like to solve mysteries. My German, which had been out of practice came in handy.

Since March of 2010, the DIEGO VOCI PROJECT (#DVP) has received 11 identical images three separate times from three separate people, each wanting to sell the same 11 paintings. We, the DVP, were excited about a find of 11 DIEGOs at one time! Here are two of the large paintings. 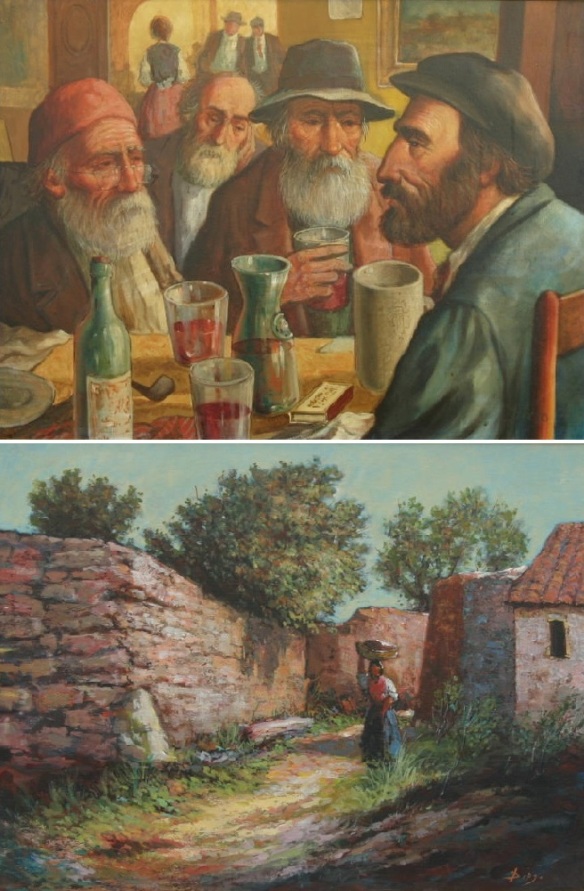 1. When Ursula and Peter Puehler contacted DVP in 2010 via German e-mail to sell the 11 DIEGO paintings, we believed they were the owners. We responded. DVP never heard back from them. 3 years went by.

2. In 2013, Marisa Barchetti, sent images of the same 11 DIEGOs. These DIEGOs were the identical images the Puehler’s had sent to DVP. Marisa only spoke Italian (lives in Rome). She informed us the paintings belonged to her brother Ciccio who had a restaurant in Pirmasens, Germany, but had passed away of cancer. She did not know the Puehlers, or how they got the same 11 DIEGO images. We attempted through various means to communicate. Marisa finally explained she did not have the paintings, but was looking for them herself. We hit only dead ends. More silence.

3. I intensified my search to find the DIEGOs. I found a dated reference to Ciccio online as owner of the restaurant; but, it was now in the ownership of Mario Augurusa. It was re-named Da Mario Ristorante-Pizzeria. I called Mario. He revealed he bought the establishment from Ciccio. He also revealed quite firmly that he knew nothing about 11 DIEGOs and did not know the Puehlers. But, Mario said, “I have a few of my own.” My sister Kendra visited Mario. We featured only 3 of the DIEGOs as his others are in storage, which we have not seen.      https://diegovociproject.wordpress.com/2015/06/18/dining-with-diego-part-2/

4. THE LATEST: In April of this year, DVP again received the same 11 DIEGO images that Puehlers sent 5 years earlier; this time from a Johannes Volkemer also from Pirmasens. We were awestruck. With a bit of finesse and some luck we communicated in German. Johannes replied to DVP and told us he was Ciccio’s son – and that Marisa was his aunt living in Rome, Italy. He did not know the Puehlers. He was wanting to sell the DIEGOs. We asked that he provide us with backs of the artworks and the measurements, but he said he personally did not have them – Johannes’ sister did. Does she or doesn’t she? We requested the information again on 20 June 2015.

SO WHERE ARE THEY?

All of the fierce pain from cancer metastasizing and sapping what was left of his strength, #DIEGO could not stop drawing. Drawing was as important to Diego as breathing.

“Diego drew every waking minute”, said Tony Voci, nephew, of his 1957 trip in #Europe with his art compelled uncle Diego.

So weak he could barely hold the pencil in his last hours, this is his final artistic expression. A small sketch that Helga Voci treasures as much as her husband’s best #masterpieces. 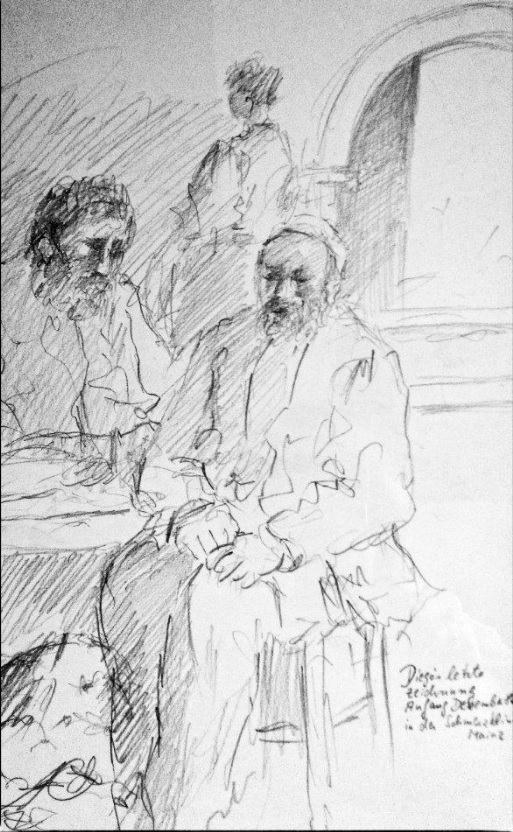 “The faces of the women”, Christine Khan replied to Coop #Cooprider just three years ago when asked, “What attracted you to Diego?”

Like so many DIEGO collectors Christine could not stop at having one Diego and she is hoarding them and enjoying them to this day. Christine Khan owns more than 3 dozen DIEGO artworks, but states very clearly in the interview with Coop (and Helga as a witness): “THEY ARE NOT FOR #SALE –  NOT EVEN ONE!” 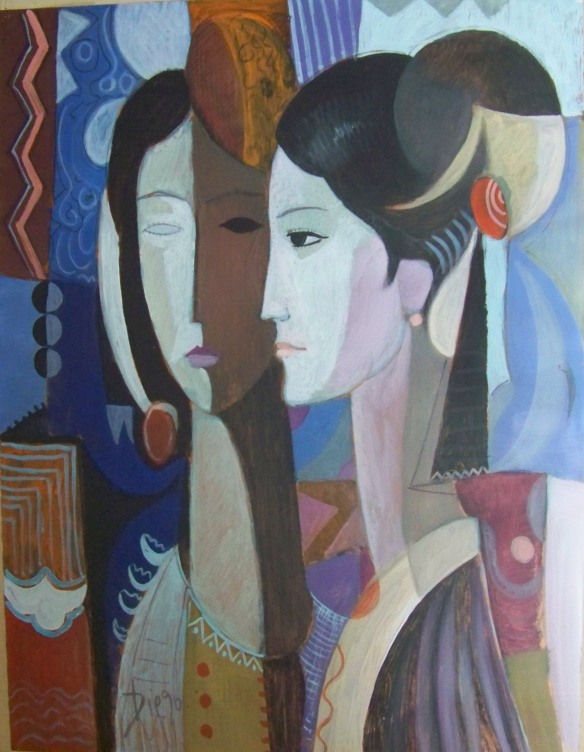 In Diego and Helga #Voci’s home in Taunusstein, #Germany (near Wiesbaden) Coop Cooprider, with his daughter Kendra and her son Ian, made video clips of their interviews. With Helga and Alessandra Voci to join them that Saturday before #Easter of April 7, 2012, Christine Khan recounted her memories of Diego and her relationship with the #Artist and his family. Stay tuned for more fun facts about the #Painter, #Father, and #Friend.  See more:  https://www.pinterest.com/diegovoci/

Did you miss a PAINTING of the WEEK? In addition to this #Modigliani like work Diego rendered a variety of ‘faces’:  http://www.artifactcollectors.com/diego-voci-painting-of-the-week-5154118/Page9.html#265 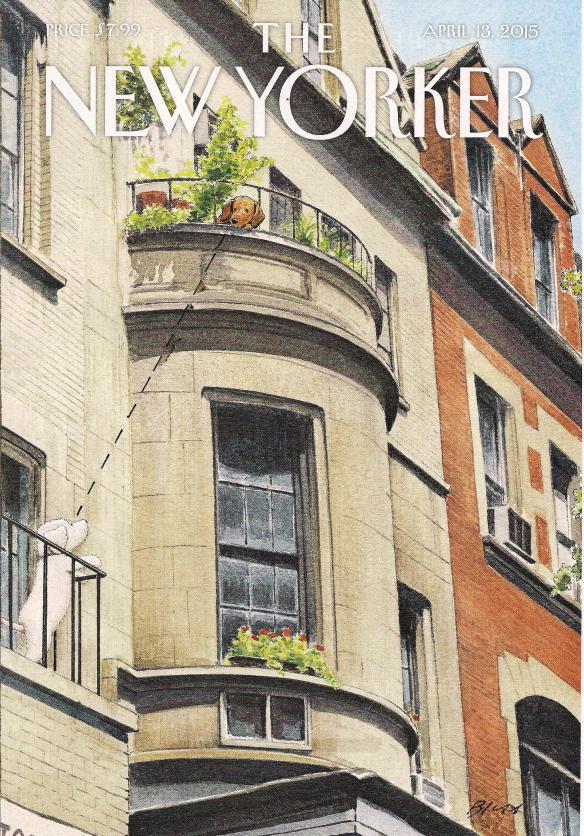 Both Diegos were fascinated by the people around them.

Both Diegos were considered #figurative artists.

Both Diegos portrayed the working class. 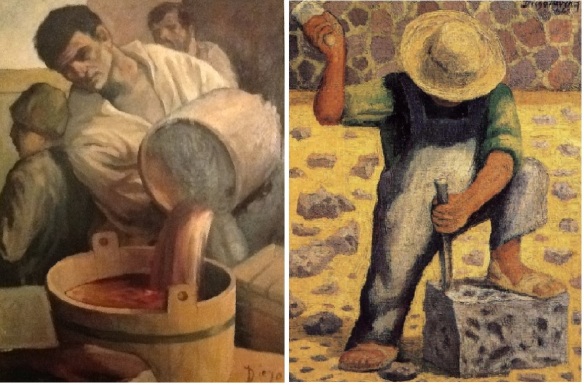 Be sure to CLICK on IMAGES in tool bar for both Google results.

Find a plethora of #masterpieces by both #Diegos.

Tell us WHICH is WHICH: diegovociproject@gmail.com

Missed a Painting of the Week? www.pinterest.com/diegovoci/painting-of-the-week/

“Hello everyone! As I was going through some old photos it occurred to me an episode happened when uncle Diego was visiting us in the mid 50’s, same time of the photo where the whole Voci family are posing in front of St. Peter’s in #Rome with “nonna” (grandma) Arcangela ( See photo: http://www.artifactcollectors.com/diego-history-4330818/Page7.html#198) 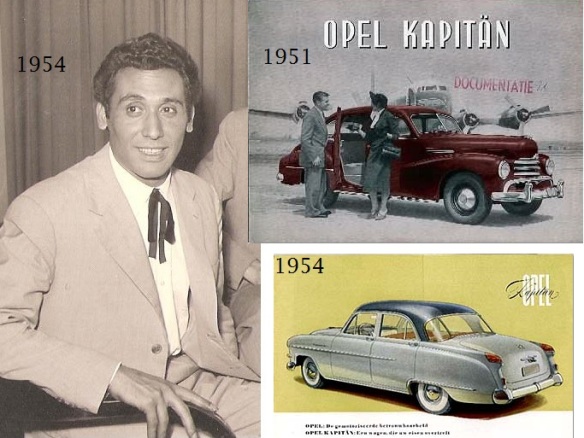 He came with his big car #Opel #Kapitän and as I was fascinated by its size and style. I asked my father Guiseppe (#Diego’s younger brother) if uncle could take me for a drive, which he did.

Whilst driving I noticed a hammer on the dashboard and I asked what on earth he had such a thing next to him. He took the hammer, and smiling he banged it against the windscreen and  said it was only rubber – that he used it when driving in Paris for the drivers there were a bit naughty. Uncle “Toto” would frighten them by banging the hammer on his windows.

Funny but true. He liked to joke a lot my dear uncle “Toto“. I hope this will be of interest to you.

Thank you Mario! With regards from the DIEGO VOCI PROJECT Team
Coop, Stephen, Lisa and Kami

Visit and Write us at: www.diegovociproject.com

DIEGO FOR SALE in MANNHEIM, GERMANY:

* NOTE THAT THE EXCHANGE RATE IS GREAT JUST NOW *

If you’re in #EUROPE and want to pick up a DIEGO, here is one for sale online: http://www.liveauctioneers.com/item/35739568_antonio- diego-voci-gasperinaitalien-1920-1985

Better yet, if you’re traveling in central Europe, HELGA #VOCI is in the Wiesbaden/Mainz Germany area and has a variety of DIEGOs to sell. 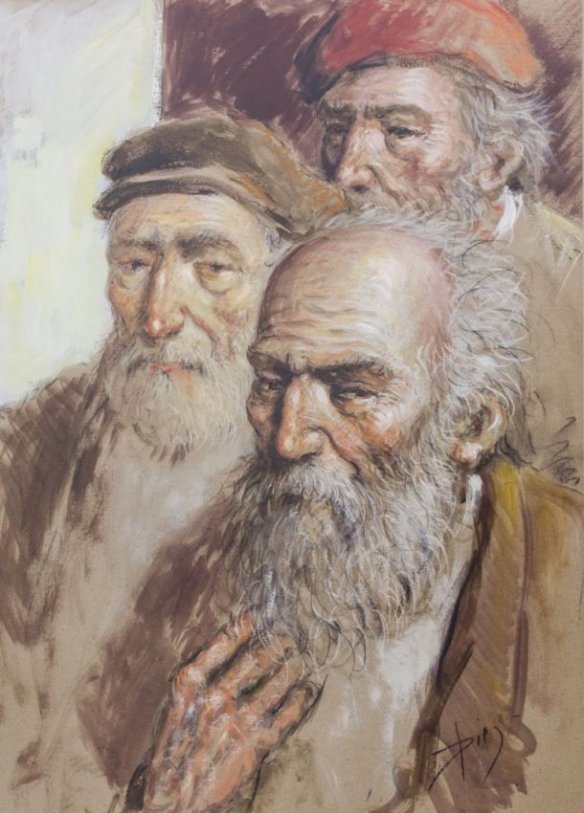 Please feel free to contact HELGA VOCI via Email at: helga.voci@gmx.de  or Phone her at: 06128-72426 calling within Germany (US to Germany – 011-49-6128-72426).    Call her for a visit, or to view DIEGOs.
Online, you can view her DIEGO VOCI ESTATE at www.diegovociproject.com under “Acquire” – Graphics or Originals.Order before you go. And, enjoy stories about DIEGO!

In the USA, you’ll see “YOUNG BOY WITH HAT” oil on wood, in oval frame. 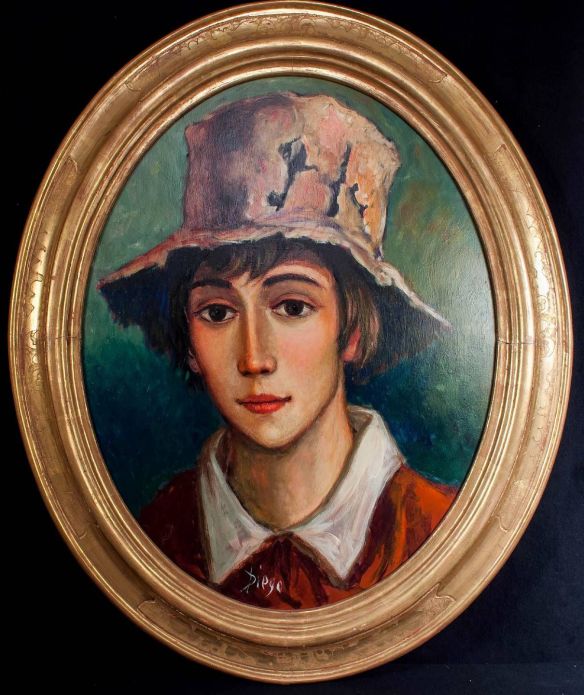 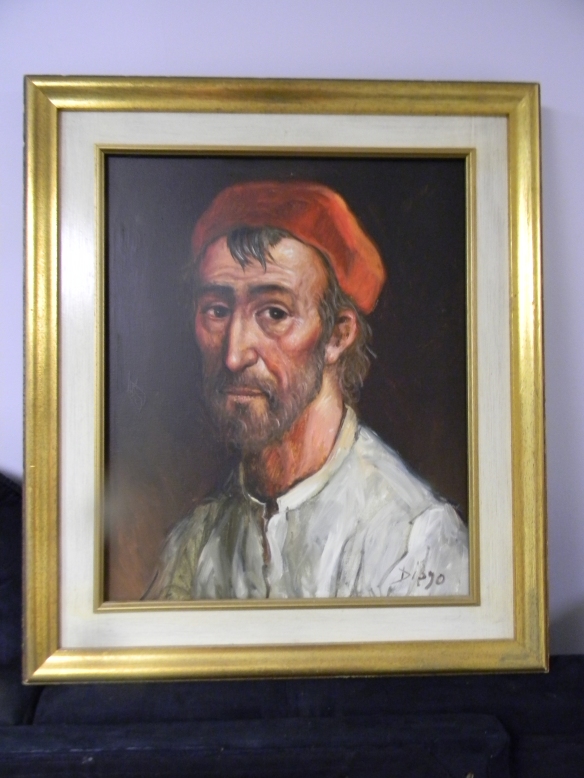 Say what you mean and mean what you say.

“By honoring your words, you are honored” 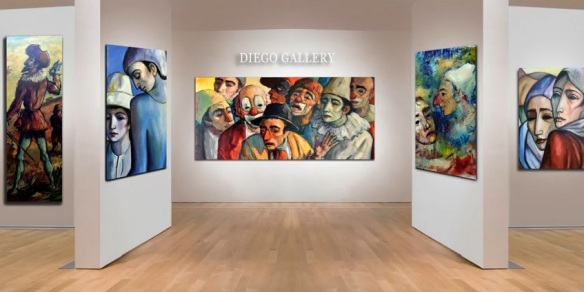